New Pathways to Increasing HIV/AIDS Resources in the Community

This has been a great year for Project HELP (HIV, Education, Learning, and PrEP). AIDS Foundation Houston, Inc.’s (AFH) in partnership with the University of Houston, Honors College Community Health Worker Initiative, trained five Community Health Workers (CHWs) to conduct outreach and education activities to underserved areas of Houston, Texas. Every week, these Community Health Workers, knocked on doors, met with community members and gave out the much needed HIV/AIDS information and resources. Their hard work paid off, as many of the individuals they educated were unaware of the available services, and had an interest in knowing more about HIV/AIDS. 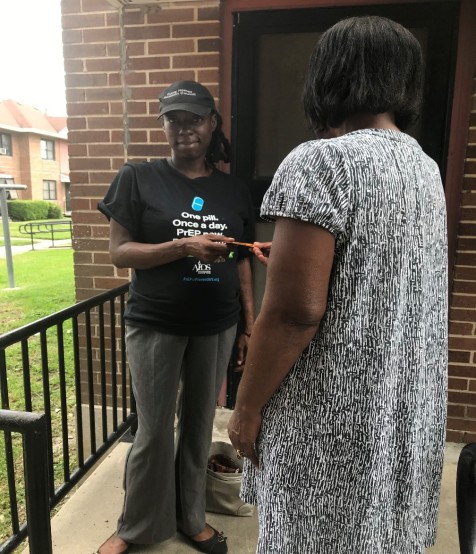 Thea (CHW) gives out a resource card to a resident of Cuney Homes.

Project HELP engages individuals, families, and communities to provide a safe and healthy environment through the following strategies:

Raphanel (CHW) shares information regarding services and an HIV/AIDS resource card to educate a resident.

The last three months, to further the CHWs experience, the CHWs, worked mobile outreach events in two areas in Houston with high transmission rates, Midtown, and Third Ward Houston. One area called Tent City is an encampment of homeless individuals in the Midtown neighborhood, and Southlawn Palm Apartments, a low income, underserved neighborhood located in the Third Ward of Houston, a target population for Project HELP.

The CHWs joined the AFH Prevention Team and provided HIV screenings and education in the mobile testing unit to homeless individuals. AFH uses a mobile testing unit to provide a safe, convenient way to provide confidential HIV testing to the Houston community. The mobile unit enables AFH to expand HIV testing efforts into the community that are underserved and the unit is used at various outreach events throughout the year.

The actions of the Community Health Worker program are reaching the people who need the information and support the most. The following is an example of a success story demonstrating the positive impact made in the community:

John* did not know his HIV status or his partner’s HIV status and was scared to get tested. He met Thea a Community Health Worker, while she was in his neighborhood outside the local community store. Thea stopped and talked with John. She told him about PrEP and how to access trustworthy HIV information through the National Library of Medicine. John had several questions and concerns, so Thea connected him to AFH ’s testing and PrEP services. John made an appointment and as a part of his visit got an HIV test and an HIV negative test result. He also set up a consultation and visited the PrEP clinic. John started taking PrEP and is currently talking to his partner about scheduling an appointment. After John took the initiative to stay healthy, he said, “I want everyone to know they don’t have to stress or worry, there are services and help. I will practice safe sex moving forward.” The Community Health Worker program, specifically Thea, helped ensure one more individual increased his chances of staying healthy and reduced the potential of an HIV transmission in the community.

*Not his real name