YTH’s continued work with the National Library of Medicine [NLM] focuses on offering a new and novel approach to HIV prevention among transgender-spectrum youth and provides an update on the expansion of their they2ze mobile application. 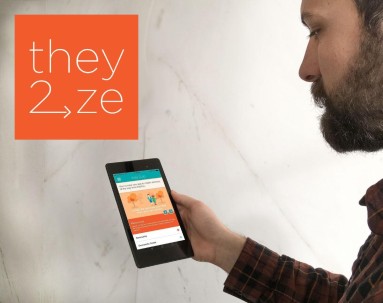 they2ze was created by YTH (youth+tech+health), with the help of the National Library of Medicine, and is designed to assist youth and young adults who identify within the transgender-spectrum with access to inclusive and vetted HIV resources, practices, and medical referrals. Launched in May of 2017, they2ze now has approximately 300 downloads and was featured at the 2017 National Transgender Health Summit in Oakland, CA.

The app, which was originally designed and piloted among the 9 counties that comprise the Greater San Francisco Bay Area, is now in its second phase of development that will expand its resources throughout the entire state of California. To assist with the expansion, YTH has spent the greater part of this quarter focusing on increasing community outreach by engaging with several transgender – spectrum youth providers and community leaders located in Los Angeles, Santa Barbara, Delano, Fresno, and Monterey, and is currently in the process of enhancing its trans-focused community advisory board to be more geographically representative of the state. The advisory board, whose main role is to provide a geographical and personable perspective, will include several new youth and young adults located throughout the state, all of whom identify within the transgender-spectrum who will offer their support and input on the expansion of the app. 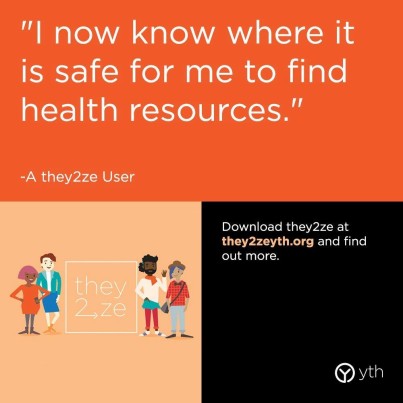 This expansion comes in a timely manner for some California State counties who have been traditionally overlooked. Gloria Garcia, who works as an LGBT Community Worker at the California Rural Legal Assistance (CRLA) in Delano, CA, notes that many of their local clients don’t have access to trans resources and could benefit from an app like they2ze. “I am frustrated and tired of not being able to live my true self in my own home”, says one of Gloria’s Kern county clients. “I have been trying for over two years to get on hormones and I can’t; whether it’s a doctor or my insurance I feel like I am running into a wall”.  The they2ze state expansion is expected to be completed by the end of January with a soft release towards the end of March.

Learn more! The they2ze app is now available for download for iOS and Android users.

Like Loading...
‹ Bringing HIV/AIDS Information to the Heart of the Commonwealth: University of Massachusetts Medical School
Amgios Amantes ›